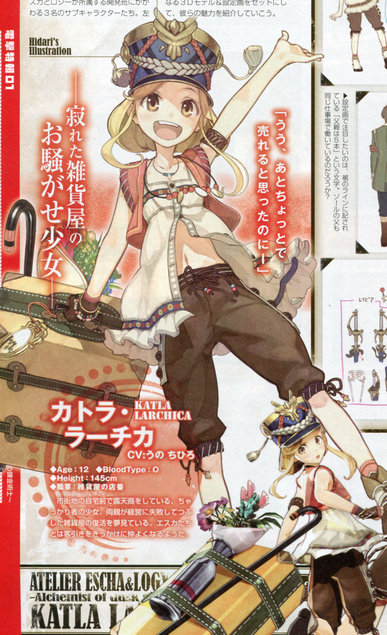 Considering it is a Tuesday, we have some more information from the leaked scans of Dengeki PlayStation and this time around we have more information concerning Atelier Escha & Logy Alchemist of Twilight Sky. However while I did mention that characters were revealed, they are not playable characters.

As you can see to the scan on the right, we have Katla Larchica who is a twelve year old assistant at the general store, Solle Grumman who is the clerk at the general store and Mici Sun Mussenburg who is a fourteen year old member of the elite, but unfortunately no other details were provided for him.

Outside of this it was also revealed that while players travel on the field to collect items and battle against enemies, a gauge on the left of the screen will fill up. Once the gauge is full players can trigger a special battle that will reward a victory with rare items. Footage of this gauge can be seen in the forty six minute long gameplay video released yesterday.