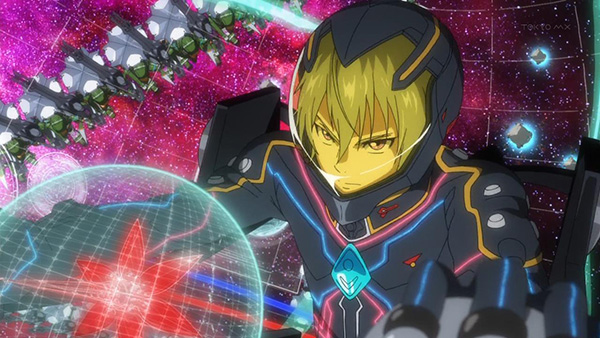 The spectacle of the first two episodes of Gen Urobuchi’s take on the sci-fi mecha genre stayed with me for days. The opening half of the first episode throws the viewer right in the middle of a Gunbuster-esque space opera. Bio-organisms surviving the vacuum of space and infesting a hive, a “hot Jupiter” planet against the backdrop of an angry sun. A galactic society with established citizenship protocols. AI interfaces that aid pilots in every possible way. Wormholes. Singularity cannons. Quantum reaction warheads. Gargantia bombards you with its surprisingly detailed and, as far-fetched as it is, believable premise.

I say believable because whether it’s due to the author being a grounded realist or not, the show does try to stay within known limits. It recognises the nearby star’s deadly radiation, affecting humanity’s tactics on the battlefield. Well known facts like radiation in space are rarely touched upon in anime, with the force of gravity only recognised in other shows. 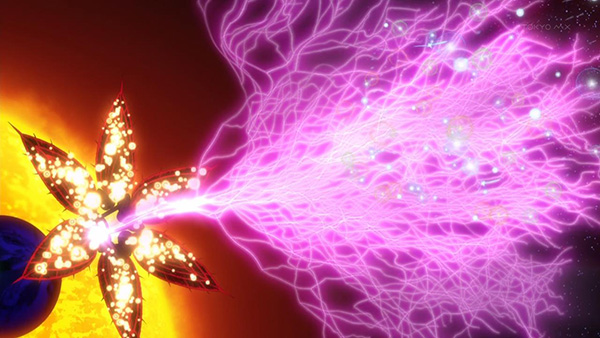 The human race is now advanced beyond measure, having left the Earth an untold number of years ago due to a catastrophic ice age brought about by abnormal solar activity. Spreading far across deep space humanity’s home is now Avalon, a network of bio-domes and space colonies where it seems citizenship for countless soldiers is a privilege not often granted. From the two episodes aired we see very little of our now-unrecognisable civilisation, but we have an idea thanks to the main character Ledo and his talking AI mech, Chamber.

The anime has a twist from the get-go, as Ledo is literally lost in space following a bungled wormhole approach. Another example of the realism is Chamber’s pilot safety system, putting Ledo in forced hibernation for months and maintaining his vital functions. He ends up at the bottom of the ocean after crash landing on a planet, and awakes to find primitive humans trying to force his robot open. Nothing they do can put a dint in its armour though, let alone open it. The difference in their technology is that huge. 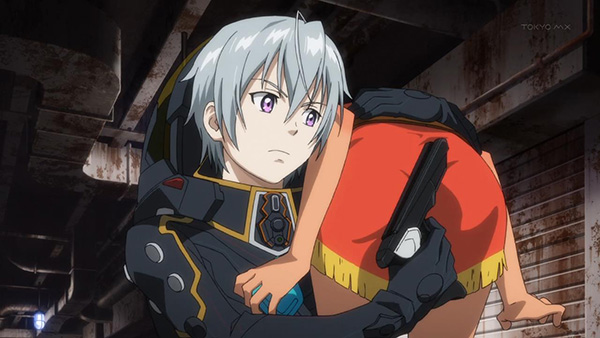 The planet turns out to be Earth devoid of any landmasses and covered in water, much to Ledo’s shock. Avalon has long ago lost all records and navigation to Earth, thinking it was uninhabitable. They were wrong, as remnants of humanity remain on floating barges. These cities on water follow ocean currents inhabited by light bugs where in large numbers they generate electricity. It’s an ingenious way of explaining how a society can utilise energy on a water world. 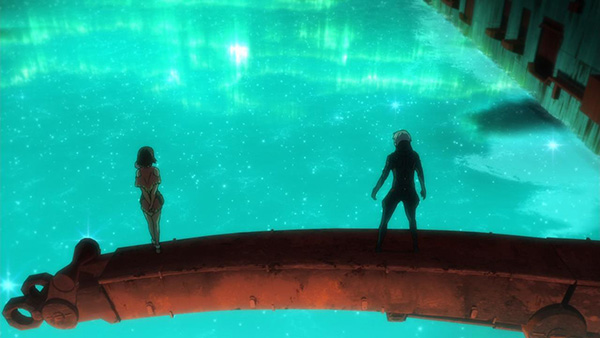 The greatest intrigue for me is the interaction between Ledo and the local human, Amy. From each character’s perspective they can’t understand each other and hearing Hisako Kanemoto speak gibberish was cute enough to put me in cardiac arrest. But it gave me chills when Ledo was asked where he came from, to which all he did was point up at the sky. Or the sheer joy when Amy is shown that the robot indeed talks by itself as an AI, reacting in the same way any of us would if an alien was kind enough to show us how his anti-gravity UFO works. Ledo’s UFO, however, happens to pack lasers as he obliterates a raider fleet in seconds and vaporises the pirates to dust.

A big complaint I’ve seen was the mechs don’t look cool enough. I think the objective here was to make them unique from the Gundam look-alike’s we’re used to. The ridiculous propulsion sphere that appears over its head just highlights how alien the damn thing is. The “star person” doesn’t mean harm to the humans on Earth, but I wouldn’t be surprised if they come to think of him as omnipotent, even god-like. One minor complaint is that I hope the series doesn’t focus all its attention on Earth. The premise of the Galactic Alliance of Humankind fighting against the Hideauze was established really well, but then it took a backseat. 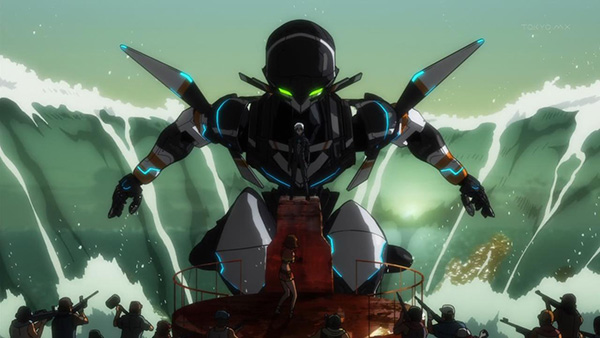 Looking ahead, I’m thrilled to see what Gargantia has in store for us. Production standards are through the roof, with ace animation quality and a soundtrack that could prove a winner. While other shows like Valvrave seem great, they don’t have an identity in my opinion. Gargantia however seems like it wants to carve out its ideas as its own. I don’t actually think of this as a Gen Urobuchi show, partly because I think he wants to move away from the “grimdark” writing everyone either admires him for or rolls their eyes at. This is a show about excitingly big ideas, ideas that Gen probably had boiling away in his mind for a long time.

New Gundam Series to be Revealed