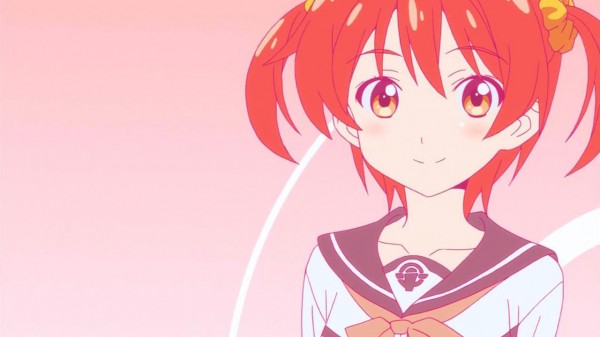 It’s now the fourth week of the Anime Girl of the Week feature and although this one is a bit late, this feature focuses on one female character from a currently airing anime and place the spotlight on them by providing background information, personality details as well as a slew of fan-art and official artwork.

This week I’m going to break the rules a little bit by focusing on a girl from a series that actually ended two weeks ago, but thanks to the various events that have occurred I was unable to provide this one last week. As such, you can expect the first girl from the Spring 2013 anime season to appear in next week’s Anime Girl of the Week.

In the world of Vividred Operation, there is no war and the Earth is at peace thanks to the invention of the Manifestation Engine which has provided unlimited energy to the entire world. However when mysterious beings known as the Alone appear and attempt to destroy the Manifestation Engine, which in turn will annihilate the universe due to the power it contains, it is revealed that four girls are the only hope that the world has.

Akane is the granddaughter of the famous Kenjirou Isshiki who originally designed the Manifestation Engine and she is a very energetic girl who is outgoing and innocent. She remains positive even when things look grim and because of this she manages to make friends very quickly with those around her.

To battle against the Alone Akane transforms using the Vivid System where she is able to wield a boomerang style weapon that can be thrown or used as a melee weapon to damage enemies. She has fear of heights which doesn’t bother her too much when she is transformed, but troubles her when she is riding upon her flying motorbike Wanko.

She has been long-time friends with Aoi and quickly becomes friends with Wakaba and Himawari in school. Of the girls, Akane is the leader and thanks to the fact that she is the first user of the Vivid System she leads the girls against the Alone whenever one appears. She has the unique ability to “Dock” with the other girls and transform into a more powerful girl that enhances the abilities of the girl she docks with. For example, she can dock with Wakaba and form Vivid Green or Himawari and become Vivid Yellow where they have higher attack and speed or defensive abilities respectively.

When she isn’t battling Alone or attending school, Akane lives at home with her grandfather and younger sister where she has a part-time job delivering newspapers. Her mother has been hospitalized ever since an explosion at the Manifestation Engine killed her father. For some reason Akane adores mayonnaise so much that she is willing to coat any food with a sickening amount of mayonnaise and adores tomatoes.

Vividred Operation is currently licensed in North America by Aniplex of America and is available for streaming at Crunchyroll.