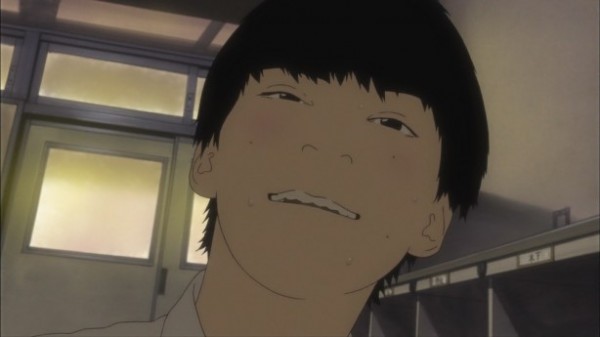 The long-awaited premiere of the anime adaptation of Shuzo Oshimi’s dark romance manga Aku no Hana (The Flowers of Evil) has been marred in controversy. Many fans of the manga as well as the uninitiated caught a brief glimpse of the Aku no Hana through a surprisingly reserved trailer which didn’t happen to feature any actual footage of the anime itself in action. This raised some alarms, but it was the studio’s refusal to disclose character designs that was most concerning. It’s now clear why. Aku no Hana is very different – the worst kind of different – the bad kind.

Unless you have been living under a rock this past week, the anime community has been embroiled in heated debate over this anime series. The question of discussion being whether or not Aku no Hana’s unique style is a good thing or a bad thing. In case the title of this article didn’t make it clear, I am firmly seated in the latter side of the argument. I strongly believe that the Aku no Hana anime is a terrible mistake on the part of Zexcs and a disservice to the excellent manga upon which it is based.

It is easy to pass off this series as simply an ugly anime series that falls deep within the uncanny valley due to its terrible use of rotoscoping, but the problem with Aku no Hana is far deeper than that. 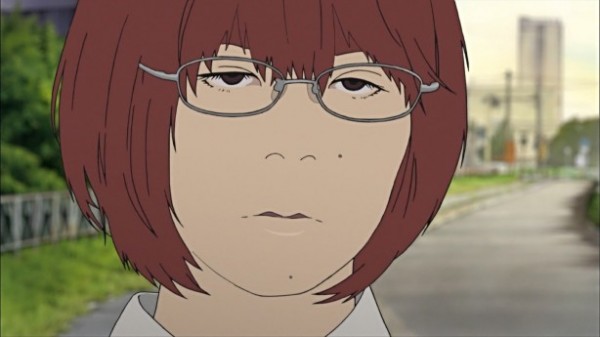 Zexcs have devoted a lot of their time to creating a certain atmosphere with Aku no Hana. It walks far over the borderline into the uncanny valley which creates a repulsing vibe, as well as utilising  a dark soundtrack, mute pallette and a snail’s pacing, a lot has been done to convey a tone and atmosphere. But scratch at that surface even a little and the shallowness of it all is clear as day. It is all atmosphere no substance. So much time is devoted to creating a mood yet Zexcs fails to do anything with it. It is certainly disappointing to see this coming from the studio responsible for the excellent and truly moving Mushi-shi anime series.

The worst part of it all is that the entire aura of disgust falls apart due to the often ridiculous facial expressions created by the poor rotoscoping effort, resulting in anything but the intended tone of the scene. The substance is missing, the emotion is non-existent, the spirit of the manga is lost.

Of course though for many people it is the art alone that will drive them away. Rotoscoping is a technique most often used for animating fluid natural motion. It isn’t often used is such a lazy way as witnessed in Aku no Hana, this is as sloppy as it gets. Some may claim that the characters look more realistic and move more naturally in this instance, I’d counter by saying that it is far more unreal than your standard anime series. People just don’t look like that, there is a faint resemblance and that is where we fall into that all too familiar valley. It’s uncanny isn’t it? Those blobs in Aku no Hana look almost human, except they are not.

Here is comparison between the manga and the anime series: 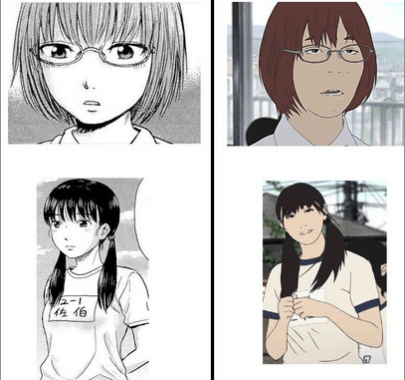 So why was rotoscoping used in the anime series? Well many would claim it to be intended. I don’t feel that was the case. This really appears to be a situation in which the studio had little faith or confidence in this production and opted for the cheapest alternative possible. Some call it art, I call it lazy and cheap. The animation, if you can even call it that, is simply awful by all counts.  The fact that the studio refused to reveal character designs or any substantial art before was not a sign of confidence, it was anything but.

There is no denying it, Aku no Hana is different, it is unique among its peers. But it is a perfect example of different and unique not always being good, because Aku no Hana is anything but good and that is sad. The manga upon which this series is based is considered a work of twisted genius, this anime is just nothing. It is empty, shallow and void of any of the depth found in its brilliant source material.

Different is something that we associate with something new and fresh. Unfortunately while many things one would call different are good, Aku no Hana is evidence that being different does not always equate to being good.

It goes without saying that the Aku no Hana anime series is not my cup of tea. What I see is a mess of an anime, that probably should never have been made. What do you see? Do you view things differently? Maybe you even enjoy this series? Whatever it may be that you think of Aku no Hana, sound off in the comments section below what you think of this controversial anime.

You can check out my Aku no Hana first impressions video here.