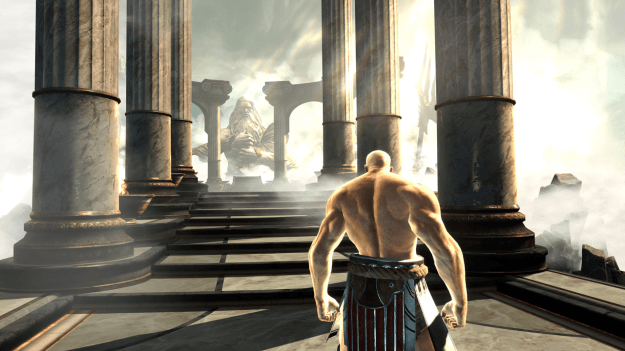 Multiplayer in a God of War game…some people just can’t grasp how that works. Some think it can’t be anything but a tacked on mode that they will undoubtedly overlook in favour of the tried-and-true single-player campaign (our hands-on with which can be read here). Well, we recently received an invite to the closed God of War: Ascension multiplayer beta and have some impressions that will hopefully alleviate those fears. We delayed this posting so that we could get some hands-on time with the third match-type featured – Capture the Flag, which was only added two days ago.

You start the beta with a clean slate, with no allegiance, no specialties, not even a distinguishable look. Being dropped into Olympus Arena, you must approach the center and choose your deity. From left to right, there are statues of: Ares, Hades, Zeus and Poseidon. Hades and Poseidon are locked for the public beta. Each choice has a couple paragraphs in the voice of the chosen God that attempts to appeal to the warrior. A quick explanation of what your starting attributes would be like under each God is also given (which I’ll go into later). Once a choice has been made, a tutorial commences.

The basics are taught: light attacks with “Square” , heavy attacks with “Triangle”, blocking with L1 and parrying with L1 and X together. There’s an advanced tutorial available immediately after completion of the basic, but it can be skipped. Leave the arena and you’ll find yourself in the beta main menu/hub. This menu screen displays your character in the center, with your attributes/active abilities listed on the bottom right and your XP bar on the top right. By pressing L2 or R2, you can swap between the Ares and Zeus classes, so your initial choice is not set in stone. 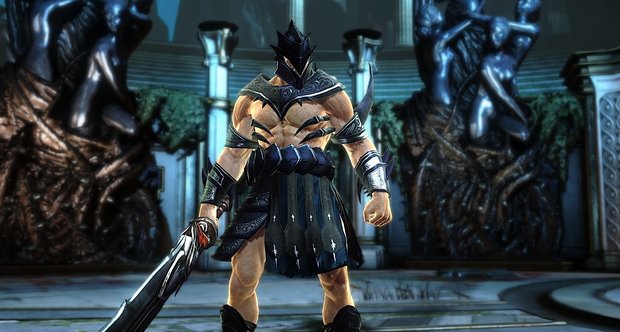 While playing, you will accumulate tokens that can be put towards buying new powers and items, among other things. Other objects such as armour and weaponry mostly unlock once you reach a certain level or complete a specific task – such as “Aligned to Ares – Kill 50 VS Opponents”. There are also silver-topped “Treasure of the Gods” chests which can be opened in the middle of battle that will unlock pieces of, or whole armours and weapons. On the top left is a scroll wheel of sorts that is broken up into 4 categories: “Game Mode”, “Quick Play”, “Champion” and “Training” (which are the aforementioned tutorials – added to the main menu after an update). “”Weapons”, “Armour” and “Abilities” are the three sub-menus within “Champion”. Starting off, you will naturally have the most basic of blades and no additional armour.

This actually ties into the first criticism of the multiplayer, which is that when matchmaking, experience levels aren’t taken into consideration. I remember the first match I played; I got annihilated. But it’s also down to a learning curve with the pace, combat and stratagem needed as, once you get more acquainted with “the way of the world”, things start to even out a little. Though it should be kept in mind that very few people would be playing the beta at any one point in time, so that sort of matchmaking option is not exactly necessary yet. But in the full release, it would be appropriate and appreciated.

Initially there were two match-types available: Favour of the Gods (4 Players) and Team Favour of the Gods (8 Players). Favour of the Gods places the player in the confined “Forum of Hercules”, where Hercules watches over the battlefield as Trojans and Spartans brutally kill each other. The goal is to reach 8,000 favour, or as close to that number as possible, within the 10 minute time limit, although the time limit is rarely an issue here. Favour is acquired by netting kills and opening chests which periodically appear in a flash on the edges of the battlefield. 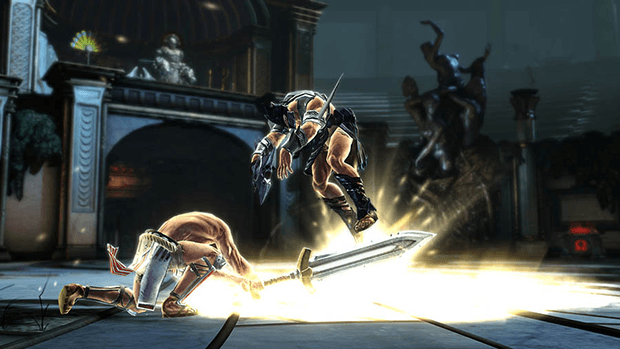 There are multiple kill-types to achieve: basic kills, Brutal Kills on opponents near-death by pressing R1 (finishers like when Kratos rips off the wings of a Harpy for example), knocking opponents into the thorny vines covering the walls, lighting a brazier that unleashes a hail of flaming arrows and knocking opponents off the stage (“ring-out” as I like to call it). The “ring-out” kill is made possible by Hercules himself as he intermittently jumps down off his pedestal and sends a shock-wave throughout the forum with his Nemean Cestus that knocks everyone down – unless you jump over it – and destroys parts of the barriers in the arena.

Weapons of the Gods will often reveal themselves on the battlefield, and can be picked up and used for a short period of time. They are mapped to the “O” button, which is usually used for kicking when no special weapon is equipped. Pressing L1 and O together activates a signature attack for that weapon that does massive damage, but results in you losing the weapon in that instant. Health and mana pits also pop up during play, which refill your health or mana once you simply cross over them, requiring no further interaction, unlike the representative chests in the single-player campaign that we are familiar with.

The match-type is fun and becomes pretty hectic. Players seem fond of using R2 to employ their radius-based magic in this arena because of it’s smaller scale and size and the therefore inherently higher chance of hitting their opponents. Again, starting off with no magic and having to face people, off-the-bat, who have upgraded their character to that point was frustrating in the beginning. But, as you earn XP (and it comes fairly quickly depending on your performance), you will be able to level the playing field and become a more efficient killing machine. It also didn’t help for me that the Ares class is less magic, more brute strength…players who want a focus on magic should choose Zeus. 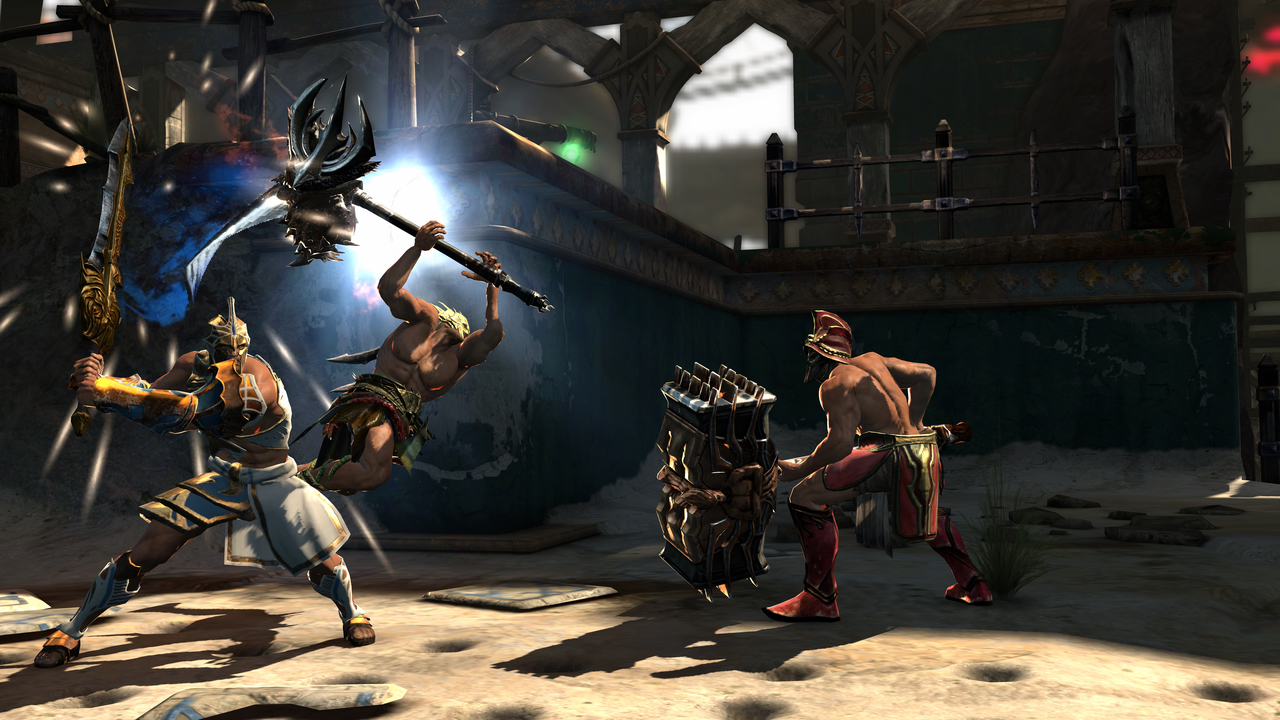 Team Favour of the Gods has the same overall concept and majority of features as its individual brethren, however many more elements are added. The level the match takes place on is called the “Desert of Lost Souls” and is multi-tiered, with a Hyperion Gate providing quick teleportation between them. The goal is still 8,000 favour, within the same time limit, however the point value for each action is decreased to make it more challenging to hit. Altars are present, which can be captured by holding R1. If the altar is already claimed, it will take much longer to convert.

There are fire traps that players can activate by pulling a lever nearby that are always placed near these Altars, so you can effectively stop someone in their tracks. Altars provide 100 favour upon capture and the longer they are held by your team, the more they pay out over time. However, it may prove difficult to do so with everyone scrambling for points and the elephant…or, cyclops, in the room (pictured below) attempting to halt your progress…That “beast” is named Polyphemus and is constantly slamming its hand into the sides of the arena and knocking you back or squishing you like a bug with a flat smack of it’s palm. But it’s not just there to be a nuisance.

In the far center of the top tier of the playing field, Polyphemus rests its hands. Teams may attack its hands – though not without being lashed back at – and weaken it, at which point they can finish it off. To finish it off, a player from either team needs the Spear of Olympus, which the God’s will send down through “Intervention” after an allotted period of time. Once someone has acquired the spear and initiates the final kill animation, the game shows that whole team converging in a cut-scene to finish off Polyphemus, which nets them 1,000 favour! That’s 1/8th of the goal done! 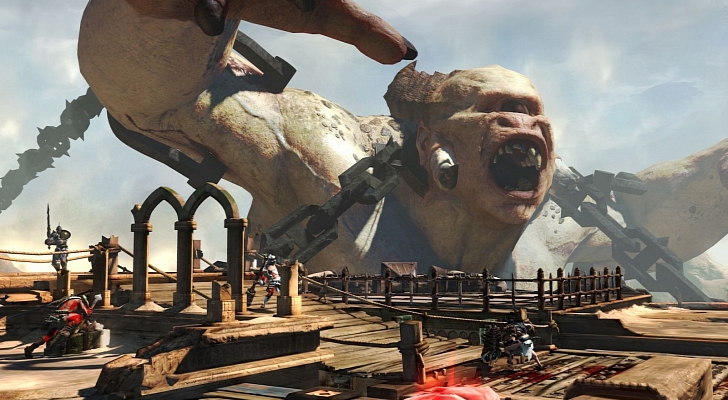 This mode can be extremely fun and frenetic, especially in those rushed moments to attain the massive favour spike that killing Polyphemus provides. Picking up a Weapon of the Gods, such as the Boots of Hermes, may require a quick tap of R1, but the spear requires you to also mash O after the initial grab command to pull it out. So interruptions are frequent, which may frustrate some, but considering it’s a potentially tide-changing acquisition, it wouldn’t be fair otherwise. I also like that there are different strategies at play as one player may want to attack and earn “combat” points, while another may target the altars and chests for “objective” points. The strength of your character and its class has a real effect on the gameplay.

Finally, there’s Capture the Flag (8 Players), the newest match-type. Same teams of green Trojans vs red Spartans and the same Desert of Lost Souls, except this time, where the altars once stood are now flags, with the surrounding area being each teams’ base. The goal is 5 flags, and it plays out as you would expect a CTF match to do so. Some people may want to defend their flag, other may go on the attack, etc. If you are holding a flag, you can attack with it, although they are very light attacks that do very little more than push the enemy away. Taking a flag requires the same input mentioned for acquiring the Spear of Olympus earlier, so it’s not instantaneous.

The Gods also intervene in this mode, although this time it’s not weapons they are sending down, but bonus flags. A bonus flag will periodically appear on the bottom tier where the third altar laid before. Players can take advantage of that Hyperion Gate to reach it quickly, or just jump down and then climb back up once they’ve retrieved it. The mode still has chests to be opened and favour to be accumulated. Although they do not affect the outcome of the match, they do add to the XP that you will receive once the match is over to help you level up.

All in all, these modes were actually extremely fun for me and retain the controls and feel of the God of War experience. There is definitely some tweaking that needs to be done along the way to Ascension’s release in March, especially in terms of match-making options and possibly the power of some magical abilities, which may be a bit unbalanced, but overall I was pleasantly surprised and impressed. It’s clear that the team at Sony Santa Monica have put a lot of effort into making sure their multiplayer inclusion is worth-while. To every God of War fan, if you are a member of PS Plus or have a trial code, participate in the beta come January 8th. “Do not disappoint the Gods of Olympus”.

PS Plus Getting God of War: Ascension Multiplayer Beta Early Next Year